August 30th 2017 is just another day of the week, but for the 4 founders of Crypto-Cash Hub, it was the day our dreams came alive. If you have been following our blogs then you know that this company was formed to challenge the systems in place. First it was building a Bitcoin funding tool that didn’t require deposits through a cryptocurrency trading platform. Checked that off on June 12th. Next up was to create an interactive forum for new users to ask questions which could be answered by a community, which makes the information more trustworthy. We launched that publicly on July 7th along with the release of our Bitcoin faucet. While blogging and researching for our forum, we noticed an opportunity in the Las Vegas marketplace. Bitcoin revolution login will allow you pull in profits.

The north is not the south.

Most people may not know this, but Nevada is almost like 2 different states. You have the northern part with Reno and Carson City where the laws are made, and you have southern, with Las Vegas, where the money is made. In between that is nearly 450 miles of nothing. What all this amounts to is, the laws in Nevada typically bare influence from the Bay Area. Nevada is also unique in that it is a server hub destination due to its lack of natural disasters. Nevada SB 398, which you can trace right back to the Bay Area, signed into law on June 5th, 2017, protects any business that operates on blockchain technology. It specifically protects these businesses from local government interference, including taxes and licenses. Local, meaning the Nevada Gaming Control Board.

I moved to Las Vegas in 2008, and got my first job as a street promoter for prive nightclub. This was the era of the private club, the cool guy and knowing someone to gain access to the venue. Tickets were unheard of save New Years Eve. These “cool guys” didn’t care about money, and wanted the venue to look good, turning down 5 figure table reservations due to “your shirt is red”. Security was handled in house, and it was typical for them to turn an eye for a solid handshake.

It was a struggle keeping gaming authorities out, who seek to control and profit from anything in Nevada. Raids were common, and prive shut its doors on more than one occasion.

Around this time want tickets came around, and along with Light Group, the only real club corporation in town, began to saturate the market. Tao Group also changed the marketplace by bringing in the Mega DJ era, where a bidding frenzy ensued. Out of this, a mega company formed, Hakkasan Group. This was the sum of Angel management group (wet, tabu, 54 and rok), Light Group (Light, Bank, 1oak and its dayclubs), Pure Management (Pure, Lax) and a few others including Rehab and Chateau.

At one point they controlled around 70% of the nightclubs in Las Vegas. They lobbied to bring in the gaming control board, who were just salivating to get their hands on this market that grew from 75 million in 2008 to over 1 billion in 2014. Hakkasan Group’s intention was to hire all the hosts who could pass a gaming background check and then regulate the rest out of business. This can be traced back to their 125% cost of a table if you are a known independent host.

May 1st, the day the gaming boards new regulations went into place. Now in order to broker a table you needed a promoter license, which costs more than it is worth, and nearly unattainable unless you can pass a gaming background check. Gone were the days of knowing someone. Clubs were now treated as concerts, and anyone with 30 dollars and slacks could gain entry. The same 4 DJs play every weekend, and really just hit a play button catered to the clubs musical director (yeah Tiesto, we know what your 2007 clublife tracks sounded like). Gaming and Hakkasan made sure to train all of the clubs on how to identify independent hosts and remove them. I know that “Bank” detained one of this towns biggest hosts while walking in a Artists DJ table and had Bellagio security harass and remove a few of their guests due to simply counting gratuity money for the cocktail server.

Somehow I don’t think our tech friends from the bay intended for this.

What happens when you take a business that can’t operate under current law or regulations and adapt it to a new technology? You create a shift in power. August 30th, 2017 Vegas Hospitality Group (a hosting company forced to stop operating due to gaming law), in collaboration with Crypto-Cash Hub (developer behind the coin), hosted the first nightclub VIP table in Las Vegas using blockchain technology. This achievement ushers in a new era where state sales tax does not apply, allowing venues to pass that savings of 8.1% on to the customer. It opens up employment opportunities for people who may have background issues. Most importantly, this allows for a proof of concept for the biggest currency overhaul Las Vegas has ever seen.

How it will happen.

Over the next few months, you will begin to see our logo at nightlife venues. This means that you may use Coincierge Club coins at this event. Our user experience guide can be found here. You are one click away from the future of Tourism. 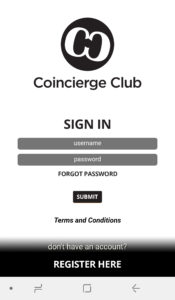